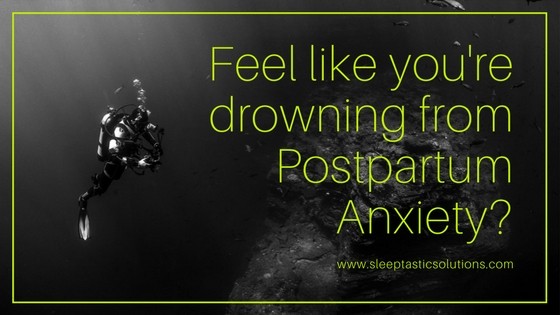 Many new moms suffer from postpartum mood disorders: depression (PPD), anxiety/obsession compulsive disorder (PPA/OCD), or psychosis (PPP). While many of us have heard of PPD, sadly many will not hear about PPA, OCD, or PPP. PPA (and OCD) is one of those things that can “fly under the radar” a bit. Because you may not be sad or outwardly struggling like with PPD or PPP, it can be easy to miss; however, anxiety can be all-consuming! As a society, people tend to make light of the fact that a new mom who is worried often is just that…a new mom. We have probably all made a comment to someone or in our heads about how another mom is over reacting or worrying needlessly about small things (I know I have). We think, “she’s just that way because it’s her first child”. While that is often true, what if it was more? What if the tiny bit that mom shows us is just the tip of the iceberg? What if behind closed doors, she’s frantic about being able to produce enough breast milk so she’s pumping non-stop, is constantly moving her baby so they don’t get a flat spot, or is up most of the night watching her baby sleep because she’s deathly afraid that if she goes to sleep her baby may stop breathing?

Sadly, PPA is very common, yet usually undiagnosed. Looking back I know I had it with my first child. I was secretly paranoid about everything, especially with her sleep. Wrong as it was, I had her sleep in my bed at the hospital with me (this was 17 years ago so they allowed it then). I laid her next to me with the rails up and basically laid awake all night to make sure she was alright and breathing. She came home having jaundice, and therefore needed to be on a special machine. Needing to be hooked up like that added to my anxiety and caused me to be more aware of her during the night. I started with her in a bassinet across the room, then moved it right next to my bed because I had to keep getting up to check her breathing after I would hear a small sound or whimper. After a week of complete sleep deprivation, I knew I needed to do something. I had to sleep or else I was going to die (or at least that’s what it felt like).

I moved her to her own room after that, but with the monitor turned as high as it would go so I didn’t miss anything. It took me another few days to realize that wasn’t really working either. I finally turned down the monitor and we both did great. Thank goodness that I was blessed to have a very easy-going baby who would later start sleeping through the night by 3 months old! After I nearly died of a heart attack one morning when I woke up on my own instead of being woken up by a crying, hungry baby, I was ecstatic to realize that she had simply slept through the night without any wakings or feeds. Yes, I was one of those lucky mamas – you know, the ones you secretly hate – the first time around (don’t worry because I became unlucky years later when my twins were born).

But at the time it was a good thing she had such a great temperament, as I clearly had a lot of anxiety around her sleep! I was embarrassed to be like that, so I never told anyone what I was feeling or thinking. I was the kind of mom who wanted the world to think I knew it all already at the ripe old age of 24. Admitting I was having some difficulty would be like admitting defeat, so I chose to hide it all. I was lucky to get through those few months pretty unscathed, other than some sleep deprivation early on, but not everyone is so lucky. Many mamas will continue on like that for months, years, or indefinitely. Feeling and living like that can be very difficult for the entire family. Not only is mom usually physically and mentally exhausted, sleep deprived, and hyper-vigilant about everything her baby does, she’s often shutting out those closest to her. Her partner may be feeling left out, other family may be shut out, and even baby suffers as they are feeling the effects of a mom who’s not enjoying parenting as much as she would like to.

Things like postpartum mood disorders can alter us as parents, whether it’s just for a few weeks or months or even years. We may start out with intentions of being a certain type of parent, but then reality hits and quickly realize that we either can’t or no longer want to do those things. How many times have you said, “I’ll never be like that with my kids”, only to find yourself doing exactly that? Maybe you thought you would be a more strict parent, but then change your mind as soon as that precious baby is placed in your arms. Or maybe you thought you would be a bed-sharing family, only to realize that you, your partner, or your baby just don’t want to or can’t do it anymore? Don’t misunderstand, it’s completely normal to change your mind about things as time goes on. It only becomes a problem when you’re changing things because you feel like you don’t have a choice.

Whether it’s PPA, PPD, or OCD, these mood disorders can disrupt your life, but it doesn’t have to. I encourage you to seek help if you need it. Don’t be embarrassed, ashamed, or suffer in silence. There are many other mamas out there just like you! With a little help and guidance, you can still be the mama you want to be. In fact the vast majority of families I work with have at least one parent (usually the mom) suffering from anxiety, as well as the majority of adult clients I see. Of course, sleep deprivation will intensify your anxious feelings, so if you’re not sleeping well because of your child’s poor sleep, then please consider helping your child learn how to sleep independently (provided they’re at least past the newborn stage). Almost all of the parents I work with report feeling and sleeping much better after their little ones are sleeping through the night! If you’re a do-it-yourself type of mama, then you can check out my book All Things Sleep: Kids! and accompanying program levels. Or, if you are beyond wanting to read and just want help right now, then one of my one-on-one packages would work best. If you’re not sure what to do, the best thing to do is to set up a free 15min phone assessment, so we can chat about your unique situation! And if you’ve suffered from PPA, I’d love to hear from you – just post below!