Blog - Latest News
You are here: Home / Blog - Children / Transitioning Out of the Crib 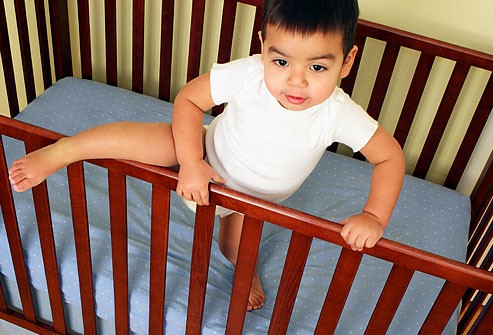 When transitioning your child out of their crib, the first important thing to remember is that there is no magic age that you should move your child to a “big kid” bed. As a new mom 15yrs ago, I thought there was an age that you just made the transition no matter what the circumstance – 2 years old. So when my daughter turned 2, we celebrated by buying her a twin sized bed with guard rails and switched her. Thankfully for me, she did fine with the move, as she did with everything else (“textbook”, easy-going kid).

When my twins came years later I waited until they were 2.5yrs old before putting them into their toddler beds. That was not quite as easy since I transitioned them at the same time as I put them back into the same bedroom together. They had been separated for almost 2 years after I did sleep training at 6mos old, but once I got pregnant with my son I knew I needed the extra bedroom. Looking back I don’t know what I was thinking transitioning them to the same bedroom at the same time as putting them into toddler beds! Two toddlers in new beds and rooming together for the first time that they could remember equaled LOTS of giggling! It was definitely a struggle for a couple of weeks, but my consistency finally made a difference and they ultimately settled down.

Finally, with my son I got smart and didn’t “rock the boat” unnecessarily. I waited until he was over 3 yrs old to make the move to a toddler bed. In fact the only reason I moved him was because we were scheduled to go on vacation a month later and he would be sleeping in a bed. I didn’t want him to be afraid of the hotel’s bed, and I also figured he would likely get used to it and want to continue that routine once we were back home. So I went ahead and purchased a toddler bed for him. I have to say that I was a bit nervous moving him since he’s a very strong willed child who likes a good battle. But thankfully the transition worked well for him and after a night or two he finally understood that he was not allowed to come out of his room (but should instead call for me if need be) and has stayed in his bed ever since!

So how do you know if you’re child is ready? Well, the best thing you can do is to keep her in her crib until she’s at least 3 years old, because that’s where she’s safest! She will also have an easier time making the transition and understanding WHY she should stay in her bed. I’ve seen many good sleepers take a turn for the worst after being moved to a toddler or twin sized bed too soon! Parents like me think there’s a magic time to make the switch only to quickly find out that their child is just not ready, or is unwilling, to do so. Remember, their crib is there safe place, their comfort zone, and somewhere they spend 50-65% of their day. It’s hard for them to want to give that all up, no matter how exciting a new bed or bedding can sound. So just be patient with her and let her warm up to the idea over time.

And by all means, do not force her out of her crib too early because there’s a new baby coming soon! You might have to purchase a second crib (new or used) if the child is too young yet, but believe me it will be easier than trying to sleep train your 20mo while in a bed when you have a newborn! Also, keep in mind that you don’t have to do an immediate move to a big kid bed just because a new baby is coming. If you plan on keeping your newborn in a co-sleeper, bassinet, or pack-n-play bassinet for a while then you will have a few extra months in which to get your toddler acclimated to her new bed months later than you first intended.

When you think you might be ready to do it, you’ll want to talk to him about it briefly beforehand without making it into a big deal, just in case it gives him anxiety at the thought of moving. Just because you think he’s ready, doesn’t mean that HE thinks he’s ready. The best part about doing this when your child is older is that you can talk to them about it. Ask him how he feels about the idea of getting a new bed. Does he want a new bed or does he want to stay in his crib a while longer? If he’s not ready yet, don’t push it. Instead try slowing down the process by implementing small steps first like lowering the one side of the crib so he can get in and out himself while still feeling secure. You can also read stories about this milestone, let him see his friends’ or cousins’ “big kid” beds, and just continue talking it up.

If, when you talk to him, he sounds ready and excited about getting a new bed, then you’ll definitely want to get him involved in process. Let him have a say about what sheets and comforter set to have on his new bed. Let him choose where his bed should be in the room. Let him decide what loveys (ie comfort items) should accompany him into his bed. The point is that once you know he’s on board with this move that you get him as involved as possible with the decisions he’s able to make.

Regardless of how excited your child might be, I suggest keeping the crib up for the first night or two in case your child is frightened, not listening, or just plain changes her mind. There’s nothing wrong with going back to the crib for a while until your child is ready to make the move! It’s much easier on everyone to move her back to her crib for a while if it’s still in the room. You don’t want her to feel like she’s failed you because she’s just not ready yet. She’ll be able to try again sooner if she feels good about having control over when she transitions.

Also, moving your child to a toddler bed vs a twin/full size bed is really a personal choice. There are good and not-so-good things about both, so it’s what works best for your family. For instance, using a toddler bed is easier for those children who are on the younger side and/or less ready to make the change over. If you’re child is over 3 years old, or is tall for his age, then you would probably want to jump right over to a twin (or larger) sized bed. Bed rails would also be helpful to start off with so that he or his loveys don’t fall out.

If you need help with the transition, or with teaching your toddler the sleep skills necessary for staying in their bed/room and sleeping through the night, I can help! My Toddlers/ Preschoolers Package is popular for a reason – it works! Dealing with a feisty toddler or preschooler who has the ability to get out of bed whenever he wants can be exhausting, but I can help you get the results you want quickly with little to no tears. Have questions? Then let’s chat! I offer free 15min phone assessments so I can learn about your unique situation. This free call applies to parents of children of any age, so please feel free to book your phone consult today! 🙂