Blog - Latest News
You are here: Home / Blog - Children / What Every Mom Needs To Know About Fainting 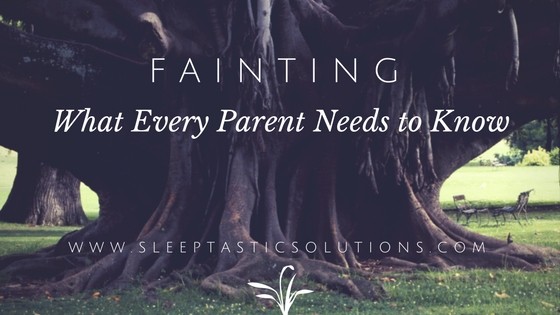 **This is a special blog post, not about sleep, breastfeeding, or infant massage, but about being a parent. I want to share a very personal, and very raw, story of mine that just happened a few days ago. I hope that it brings awareness to a common, yet rarely discussed topic.**

It was a Friday morning like any other. My teen was already at school, my husband was away for work, my three youngest children were getting ready for school, and I was just out of the shower. After getting dressed, I came back into the bathroom, which is always our busy hub in the mornings. One of my 8 year old twin daughters came barreling into the room, twirled around, slipped on the floor, and fell hard on her bottom, right at the corner of our “corner shower”. I immediately thought she hit her back or tailbone on this rounded corner (I would later find out she narrowly missed it). She popped right up, crying, and very upset. I knelt down beside her, checking her back for what was sure to have bruises, scrapes, a cut, or blood. I saw nothing, but continued to hug and comfort her for surely it had to hurt to land like that. Within a second or two I felt her push on my arm like she was wanting me to let to go, so I did.

Only, she wasn’t actually pushing me, she had fainted and fell to the floor (thankfully she only fell an inch or two). I couldn’t see her face, so I didn’t know it was happening. I didn’t know it had happened until I moved her hair and rolled her from her side to her back. There she laid, eyes wide open and dilated, yet her body was lifeless. I called her name and gently shook her. Nothing. Her breathing almost immediately sounded gurgly. I didn’t want to move her in case she had a spine injury (again I thought she hit her spine on the shower), but I couldn’t leave her go breathing like that. I lifted her head and body closer to me, which immediately quieted her breathing. I kept talking to her and holding her while screaming for her sister to run downstairs, get the phone, and call 911. She was gone for mere seconds, but it seemed like a lifetime. I kept talking to her, not having any idea what was happening to my little girl. When her sister brought me the phone, she had dialed the number but not pressed “talk” on the phone to connect the call. As soon as I pressed it and it rang once, she blinked, opened her eyes really wide, and sat up saying “I’m okay”.

I hung up on the ringing phone, because she was trying to sit up and then stand up, continuing to repeat “I’m okay”. While trying to get her to take it easy and sit down, the 911 dispatcher called me back to check to see if everything was okay. I was thankful she did so I could calm down a bit. She asked me a bunch of questions, like did she hit her head, how was she now, etc. She felt like a call to her pediatrician would be alright since she was acting normally. I immediately called them, and after another series of phone calls, I set up an appointment for later that morning. In the meantime, my daughter finished getting ready for school and was already getting out a bowl for cereal like nothing had just happened.

The pediatrician later explained that what my daughter had experienced was called a “vasovagal syncope”, which is a fancy word for “the common faint”. I had never before heard of such a thing (fainting for no reason), yet she would tell me (and I would later research) how very common it is. According to the Mayo Clinic, this happens to more than 3 million people each year in the US alone! Vasovagal syncope happens when there’s a sudden drop in heart rate and blood pressure leading to fainting, often in reaction to a stressful trigger. Common triggers include pain, a strong emotional event, having blood drawn, the sight of blood, painful urination or defecation, severe coughing, painful swallowing, sudden fright, and standing for long periods of time.

Our pediatrician said that she sees many young teenage girls with this, and it often happens in the shower (scary)! One of the reasons is that in the morning, we tend to be dehydrated from a long night’s sleep, as well as having low blood sugar from not eating for many hours. Then, many teenagers will get into a super hot shower immediately, which causes the blood to flow to the skin’s surface and away from the heart and brain. And what makes this more apt to happen to teenage girls is that they also have their menstruation. According to Dr. Andrea Chisholm, changes happening in the body at that time of month can increase a person’s chance of fainting. For instance, some normal triggers are painful periods, heavy periods (chronic blood loss can also lead to anemia), and hormonal changes.

So what should you do if your child or someone you see faints? According to Dr. Richard Fogoros, you should lay them down flat so their head is at or below chest level and raise their legs. Raising their legs gets the pooled blood in the leg vessels moving in the right direction again.  This pooling happens when the vasovagal reflex suddenly dilates, causing this massive pool of blood in the leg vessels. At the same time, the heart rate slows and the blood pressure drops, which is where the fainting comes in. Thankfully, fainting spells are usually over within one minute, though you want to watch the person for a bit to make sure they’re okay, especially if they hit their head on their fall. Sometimes there are lingering effects, such as extreme fatigue, nausea, dizziness and loss of appetite, so it’s important to wait until these lingering symptoms disappear before continuing on your day, as they could faint again. Sometimes fainting is more than just a “fainting spell”, so you certainly want to follow up with your doctor or your child’s pediatrician to make sure there’s nothing more going on.

I am sharing my story because I am amazed that in all my years, I have never heard of this, nor did I realize how very common it is. I have 4 children, help parents with their children every day, and am on a ton of parenting Facebook groups, yet again I have never once read anything on this! My hope is that a parent will read this and remember it so that one day, if it ever happens to their child, they will know what to do and not fear the worst like I did. This experience was by far the most frightening one I’ve ever had with my children. I pride myself on being a calm, cool, and collected mama, but those 20 seconds rocked me to my core. I didn’t even realize how much so until my 5 year old son asked me why I was shaking after I got off the phone with the 911 dispatcher. Needless to say I hugged and kissed my kids like crazy that day!

Again, I think this is an important topic that all parents should be familiar with, so please feel free to share with your friends and family! And if you yourself have ever experienced this, or you have a child who has, please comment below, or send me a private message, as I’d love to hear more!

*Feel free to sign up for my monthly newsletter so you don’t ever have to worry about missing a blog or other useful tips and info! As always, for help with child sleep or adult sleep, you can set up a free 15min phone assessment so we can talk about your unique situation!